Have not received the goods yet but the on-line purchasing process and communication are splendid.
Have fun but drive safely
and remember: if it’s stupid but it works, it aint stupid!

Hi John, thanks for the electronic box mounts brackets and lid, I’ve compared them with originals and they seem good but unfortunately my bike is away getting the exhaust system made, I will get back to you with the results when I can but I’m sure they are great. Cheers John. Ps had another look at the website and it’s looking great..

Hi John, attached are pictures showing your bracket on the two types of original horn I have, the bracket fits perfectly on the oif B50 but not on the earlier conventional frame type bikes. I hope your customer has just assumed that a unit single is the same no matter what the year! It’ll be hard to explain that not all aftermarket parts are as spot on as your stuff, are you from an engineering background?

I have attached a pic of my B50 just so you can have a laugh at my expense, it’s a bit of a ‘challenge’!

I will be after as much stainless as you get manufactured for my collection of unit singles this includes;

I have another complete B44 motor so maybe It’ll be 6 one day, none of these are complete or assembled, I’m 52 and this is my retirement time fully occupied already, I hope, although I have a burning desire for a grey framed A65 … maybe a Firebird ?

I took a load of parts to the local platers earlier this week only to discover that they have packed in plating !!!!!! Can I give you a call after you receive this email in hope that you can recommend a good plater.

If you are up in north Lancashire any time I would be keen to meet up for a pint / cup of tea / good old natter about old bikes.

This picture shows the bracket positioned upside down over the rear of the horn, the holes in the bracket align perfectly with the horn, as does the inside radius of the bracket.

Many thanks for both the swift delivery of the engine plates, and compliments on the plates themselves – they are excellent, very nicely made.

As you welcome feedback the following may be worth bringing to your attention as it potentially affects other customers’ bikes as well as my own, so may be useful.

As you listed the plates as parts 801056 & 801057 and these are the corresponding numbers for my own bike, (Indian Bullet 500, 1993) I bought them straight off without studying them in minute detail, especially as I’ve yet to get down on the floor and remove my original plates. Your plates are no use to me as they are, but I accept full responsibility for purchasing them – they were well described with very clear photos which I should have made more effort to compare with the originals, rather than just relying on the cited parts numbers.

[Assumption being the mother of all _____-___s; please insert favourite missing expression]

It appears that a lot of the UK import Indian Enfield models both 350 and 500 require provision for at least one spring mount on the lower engine plates, and up to the early 2000s most of them seem to want one on both sides. The spring mount takes the form of a pin with a waist to retain the spring’s end hook, some images below which are self-explanatory. I had a bit of a trawl through the online parts books for models from 1991 to 2006 and have put my conclusions below which may be of interest.

Unfortunately, my own bike needs the pins both sides in order to retain the existing cente stand (my own plates are so badly worn the stand is unusable) and my gut feeling is that a lot of other bikes in the UK would require them too, assuming their owners wanted to keep their existing centre stands as well.

I don’t know how many sets of these plates you’ve already sold or if anyone else has raised this point – I’m by no means an expert on the bikes concerned, and a second opinion would be worth seeking – this wouldn’t be the first time parts confusion has arisen with these bikes and superseded parts numbers though the system generally works pretty well.

But, assuming the majority of Enfield 350 & 500 Indian-era Bullets use at least one spring pin on their plates and owners similarly want to keep the default centre stand arrangement, I would think your product might be able to corner a wider potential market of over a decade’s worth of machines produced.

I would certainly be interested in returning my stainless set to get it modified to include spring mounts.

Considerable force is needed to fit the centre stand springs which then remain under permanent tension whichever position the stand is in, hence the mounting pins look to be suitably robust. From looking at the images below I imagine the operations would need to include at miniumum:

– Fabrication of pins with a narrow waisted section to locate/retain the end hook of the spring each side.
– An additional hole each side to locate the pins.
– Welding of the pins in place each side to secure them. 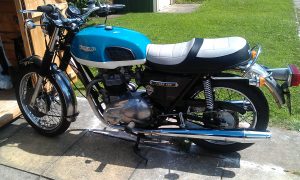