A re-styled 2001 Royal Enfield Bullet 500 Motorcycle (500cc). A one off job with custom parts (classicbikepartsuk.uk) to make it more in-line with the classic 1950’s look.

I’m looking for offers around £2,700. but any reasonable offers considered

A re-styled 2001 Royal Enfield Bullet 500 Motorcycle (500cc). A one off job with custom parts (classicbikepartsuk.uk) to make it more in-line with the classic 1950’s look. It has a 4 speed gearbox, kick start, lowered handlebars and a single seat. Ridden in the dry only and has  less than 500 miles on the clock with mot’s to prove genuine odometer reading, With these custom mod’s it’s a bit of a head turner, and more akin in looks to the old British Bike of yester-year. 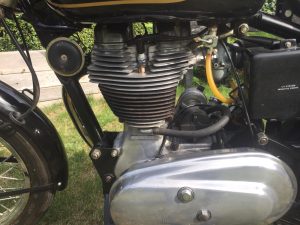 To make a genuine offer use the Box at the top. Or to ask further questions click here

Can you ride the Royal Enfield Bullet 500 on an A2 licence?

Yes, you can ride the Royal Enfield Bullet 500 (1992 onwards) on an A2 motorbike licence. There is no restriction required, as the motorcycle is fully A2 licence compliant!

The Royal Enfield Bullet 500 was originally an overhead valve, single-cylinder four stroke motorcycle.  Made by Royal Enfield located in Redditch, Worcestershire. With the closure of the factory, the manufacturing rights were bought by Madras Motors, a company located in India. To this day, it’s the longest running, continuous production motorcycle on the planet.